The 1925 Cricket Theatre
​The history of "The Cricket", so named because of its location near Wills Creek where crickets chirped continuously,
began in 1925 when it was located in the G.W. Roberts building, now the Collinsville Public Library.

The 1925 Cricket boasted seating for 197, showed silent movies, accompanied by a record player whose sound easily got
out of sync with the picture.  It had a stage where beauty contests were held and had Friday and Saturday Western movies featuring such greats as Roy Rogers, Gene Autry and Hoot Gibson.  Admission was 10 cents for children and 20 cents for adults.  As a bonus, children who attended the Friday "picture show" could be admitted on Saturday for only 5 cents.
The first talking picture shown at the Collinsville Cricket was shown in February, 1930.

The unique name "Cricket" had its advantages.  Films, rented from an agency in Atlanta, sometimes shipped to incorrect locations because of repetitious names.  After all, several theaters were named "The Strand" or "The Globe", but none
carried the name "Cricket"!  Theaters paid $10 to $15 to rent films in the 1920s and 1930s, with Westerns being the cheapest.
Shipped with films were advertising posters for the movie house to display outside the theater.
Two projectors were used to show movies: one running, one waiting.  One movie had several reels, which ran about
25 minutes each.  As one reel finished its run, the second began, with viewers never realizing there had been a projector change.
​
The Cricket was the only theater in the county where blacks could attend.  They purchased tickets at the side door
and were ushered upstairs to the balcony. 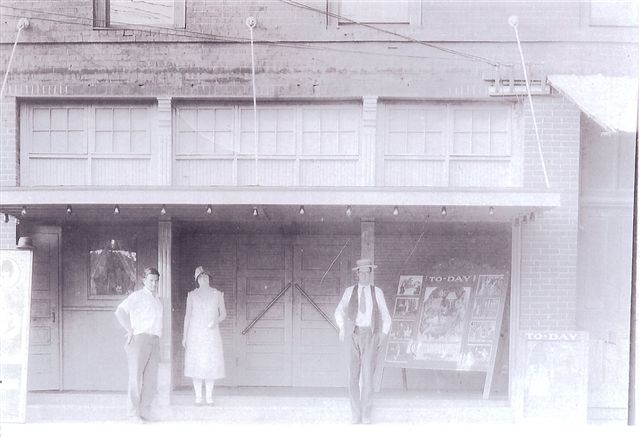 1925 Cricket Theatre is pictured above

"New Cricket Is Most Beautiful Structure in North Alabama"

With the completion of the new Cricket Theatre less than six days away and the grand opening on Feb. 12, 1946, of one of the strongest and best equipped theatres in the state, Collinsville theatre goers can be justly proud of a magnificent structure.

The front of the new Cricket sign will tower 40 feet in the air with six different colors of lighting and more than 300 feet of tubing; this sign and the neon lights can be seen for more than two miles.  The theatre's name will be spelled out in dazzling neon lights, supported above the marquee by a giant V-type steel support, which will give off illumination for the entire town.

This beautiful building will cost Mr. M. G. Weaver, its owner, nearly $75000; more than first expected.  It comprises 175,000 bricks, equivalent of 15 train car loads; five cars of sand; 25,000 concrete blocks; 100,000 lbs. of structure steel and better than 27,000 man hours of labor.  Mr. Weaver began digging the foundation on August 3rd, 1945, for this building; he has spent much time, thought and money in erecting a strong, as well as a beautiful show house.  The fire marshal, Mr. Tom Hall of Montgomery, was here last week and while making inspection he reported that it was one of the most complete and fire-proof entertainment houses in Alabama.

It has a seating capacity of 800, seating the white in the main building, colored in the balcony.  There are three fire escapes from the balcony and the entire building can be emptied, if filled to capacity, in two minutes time.  The new Cricket is 66 X 140 feet and is constructed of brick, concrete and steel and was especially designed for safety, comfort and convenience to theatre patrons.  The front is of white and brown. Mr. Weaver has installed modern seats which are comfortable and which will give you a full view of the screen regardless of the size of the person sitting in front of you.  It is equipped with modern and up-to-date rest rooms and drinking fountains.  In the projection and sound room will be found the latest and best made equipment that money can buy; that is of the RCA sound.  The projection room has a four inch concrete ceiling with five inch concrete floor, eight inch block and fire protection.

The ceiling of the main auditorium is turquoise blue and a delicate shade of pink which makes a most attractive setting; has 120 lights and 40 of these lights will be burning all during the show; thus giving a splendid view of the interior and yet not hinder the showing in the least.  It will be air conditioned both summer and winter.  The floors of the auditorium are carpeted.  The terrazzo of the lobby and the foyer is of 11 harmonizing colors.  Draperies are rose velvet with silver for the screen.

The ticket office is made of glass blocks and the doors and windows of the entire building of the latest and most beautiful material.  It is indescribable and you have to see it to appreciate the beauty and the magnificence of this stately structure. We commend the owner of this fine building for taking upon himself the task of erecting this fine edifice at such a time and wish for him every success.  "The Stork Club" will run on Tuesday and Wednesday, Feb 12 - 13 and programs will change each Sunday, Tuesday and Friday.
Collinsville New Era, February 8, 1945
1946 Cricket Theatre is pictured below 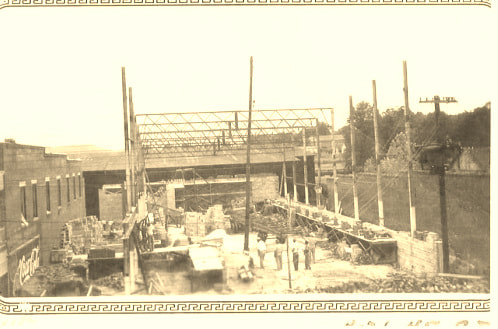 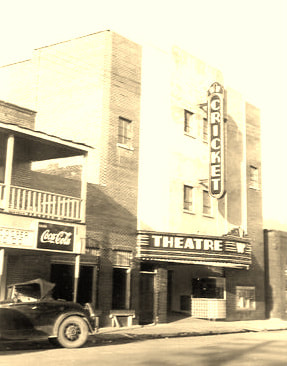 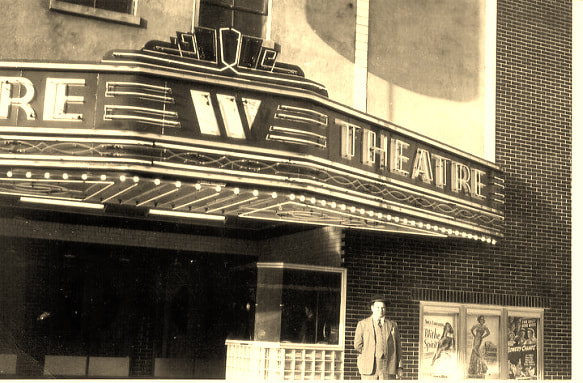 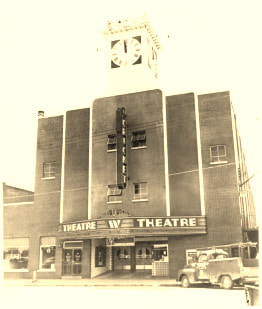 The present-day Cricket is pictured below 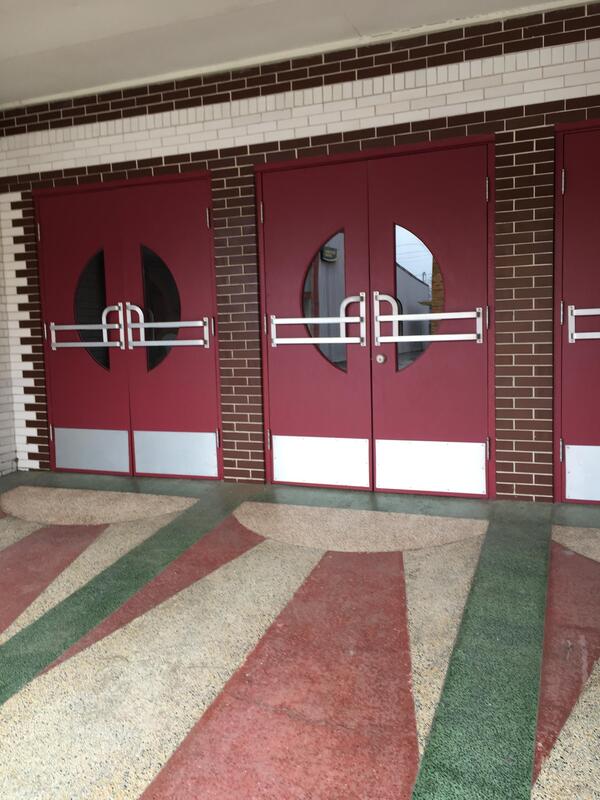 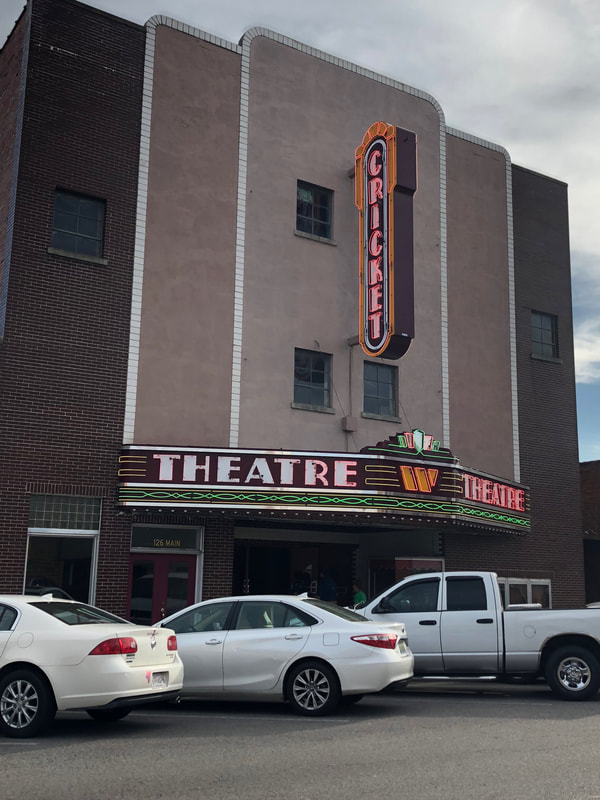